Angst in my Pants

Welcome to Cook'd and Bomb'd. Please login or sign up.

If you like CaB and wish to support it, you can use PayPal or KoFi. Thank you, and I hope you continue to enjoy the site - Neil.

Last post by Huxleys Babkins - Today at 09:18:15 AM
"I remember having sheets of ice on the windows and it never did me any harm" say people who, for some reason, decided to raise their own kids in warm, insulated homes.
#2

Quote from: AllisonSays on Today at 08:18:37 AMI teach it, but the jury's out on whether or not I like it

Same here. Not sure what level you're teaching, but I find it a bit of a challenge to teach A Level whilst retaining a passion for the stuff.
#3

General Bullshit / Re: I think I've broken my foo...

Last post by imitationleather - Today at 09:12:44 AM
Fortunately he's a psychopath and so the people mocking his poem will have no effect on him at all.
#7

General Bullshit / Re: I think I've broken my foo... 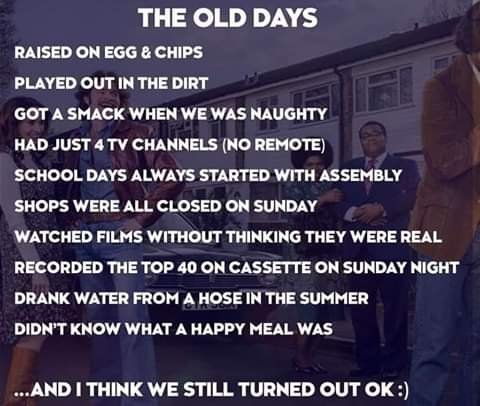 - Fairly sure very few people were raised on just egg and chips. I imagine they had it two or three times a week or something. Is this a "fuck healthy eating" or a "fuck getting a meal that fills you up" or both?

- Do children not play outside and get dirty? I don't have any so don't know. We may have the internet and gaming devices, but boomers had television just like us.

- Celebration of corporal punishment. No idea if parents still smack children, but I sometimes walk past parents threatening it. Clearly grammar isn't something they learnt in those days.

- I like the no remote in brackets. "Yeah, we had to get up and change the channel! We were hard!".

- This one is just bizarre. Fairly sure that most people know films aren't real, just like in the boomer era.

- Like a lot of these, this is just "technology was different then"

- The fucking hose point. Did that many children drink water from a hose?

No, because if you turned out ok you wouldn't be sharing this fucking meme on Facebook.
#9

Quote from: SweetPomPom on Today at 08:19:26 AMThe one where Walter and Jesse go down hill in the bath tub to impress Skylar and Nora is pure filler.

It was. But once that bathtub fell through the ceiling it was the logical next step.
#10

Last post by Crenners - Today at 09:04:41 AM
Black tea is great but not fannings from a teabag.

English Breakfast tea is a fine thing but it's like 'enjoying fruit' and only eating Golden Delicious apples your entire life. The world of tea is unfathomably diverse and wonderful.

Even better, drink green tea. Iron Buddha Oolong, Dragonwell, Gyokuro. You will realise how much of life you wasted.
Pages1 2 3 ... 10